So we frequent the Fortinos in downtown oakville.  Today was like any other day.  We walked to fortinos, chatted about our lives, the weather, our weekends.  Little did we know our lives were about to change forever.
As we approached Fortinos we noticed a strange noise coming from the building.  Some might say it sounded exactly like a fire alarm.  We decided that we really needed hummus so we continued on, ignoring the earth shattering noise.  We got to the top of the escalater and witnessed pure chaos.  Grown men in tears. Women were frantically running toward the exits.  Several small children were rolling around in flames.  Fortino’s was on fire and we were literally at the heart of it all.  Being the extreme bloggers that we are we decided even in the midst of the crazyness we had to capture the moment on camera.  We took this picture before being carried out by firemen and given CPR.

Thankful we are all okay.   It could have been a lot worse.  We all feel closer  because of it.  We’ve developed a bond that will never be broken. 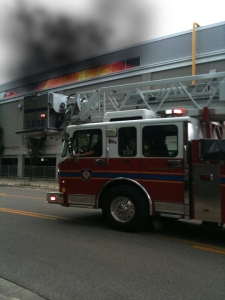