“With Kessel, if you have a chance finish him! He’s a good player… but don’t shit your pants on him!!!”
– John Tortorella

After months of desperate anticipation, and many sleepless nights, HBO’s Emmy-Award-winning, epic hit series “24/7” made it’s truiphant return this Wednesday and certainly did not disappoint. This time round, one of the National Hockey League’s most intense rivalries – The Philadelphia Flyers and the New York Rangers – is documented in the weeks leading up to the 5th annual NHL Winter classic outdoor game on January 2, 2012. The 4 part series provides fans with an unscripted, all-access experience into the lives of the two of the NHL’s best teams on and off the ice, before facing off in the first ever outdoor NHL game played at Citizens Bank Park in Philadelphia.

Now as you may or may not know I am a die-hard Toronto Maple Leafs fan, so naturally I would despise these two Eastern Conference rivals. However after watching just one episode of the new series I instantly have a renewed admiration for the teams – more specifically their Head Coaches Peter Laviolette and John Tortorella – who have both won Stanley Cups in 2006 and 2004 respectively. They tell it exactly like it is with their no holds barred attitudes towards their players and the game, and this truly resonates with me as a hockey player.

Also, for those of you who have not seen the 24/7 Penguins/Capitals from last year you may want to hide your kids, and hide your wife before watching this. If there was a drinking game for every time someone dropped an f-bomb, you would be passed out precisely within the first 10 minutes. I know Robin was. No lie! Key highlights of the episode include Flyers goaltender Ilya Bryzgalov explaining the universe and Russian booze, Sean Avery being Derek Zoolander, and anything John Tortorella says. BOOM! 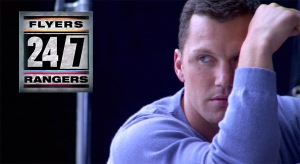